Mobile Games with Controller Support in 2019

Mobile Games with Controller Support in 2019

Now who wouldn’t love to take their favorite mobile games to another level, by playing them with a controller rather that with touch screen controls? The answer is, EVERYONE. If you’re a mobile game developer, listen up, we want 2 important things with all newly released games. The 2 things we need is that the game is released on both Android and iOS, as these are the 2 mobile platforms we are have with the ability to play competitive with friends that are either on Android or iOS. The 2nd must have is the game also has Bluetooth controller support. Mobile games with controller support are absolute gems! 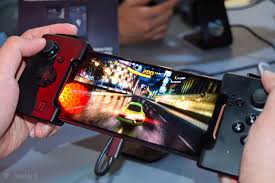 Did you know you can play mobile phone games with your PS4 or Xbox One controllers? Well you can, with Bluetooth, but the game needs to support the ability for controller support.

My goodness, does the fun and replay-ability increase when you are playing a mobile game with controller. It feels like a native console gaming experience. Mobile phones now a days are powerful even for entry level phones and can handle the technical demands of most games. Next time you need your on the go fix, be on the lookout for mobile games with controller support.

The list of games that have controller support include:

There are plenty of more game titles in addition to this list. They are gradually growing as controller support is definitely in demand, but this should be plenty to have you going with tons of mobile gameplay action.

On the mean time, check out our available selection this week!